To share your memory on the wall of Arthur Jarnegan, sign in using one of the following options:

Print
Mr. Arthur R. Jarnegan was born August 10, 1949 to Joseph and Emma Jarnegan in St.
Louis, Missouri. In this union, three children were born. His father, Joseph and brother,
Victor preceded him in death.

"Arthur was aff... Read More
Mr. Arthur R. Jarnegan was born August 10, 1949 to Joseph and Emma Jarnegan in St.
Louis, Missouri. In this union, three children were born. His father, Joseph and brother,
Victor preceded him in death.

"Arthur was affectionately known as AJ to his family and friends."

AJ married his soulmate, Mary Martin, on July 15, 2000 in their favorite city, which they
often visited, "Las Vegas.”

AJ attended the Chicago Public School system and went on to join the United States Army in
1968, where he went on to serve in Vietnam. AJ returned home to Chicago from the Army
in1970. He was gainfully employed for 25 years for the Chicago Transit Authority. AJ wanted
to continue his career and began working for Union Pacific in 2000, until he officially retired
in 2008 to travel. AJ had a passion for music and was a DJ at Mr. Ricky's for many years.

He departed this life on Saturday December 21, 2019 at 3:22 p.m. at Roseland Community
Hospital with his wife, Mary, at his side.

AJ will be missed by those who held him dear to their hearts: His wife, Mary; mother, Emma;
one sister, Sharon; one stepdaughter, Toni Hollins-Hunt (Daryl Hunt); two granddaughters
whom he loved and spoiled dearly, Tykeia Wright and Daniyah Hunt, two brothers-in-law, Carl
Martin (Patricia) and Lacy Crane; one sister-in-law, Sandra; three nephews, JT, Steve, and
Robert Jr.; two nieces, Antoinette and Caprice; eighteen great nieces and nephews. AJ was
fond of his sister-in-law and brother-in-law, Bettie and Robert Thorne, and his close, lifelong
friends, Russell and Vanessa Stephens. He also leaves a host of family and frien
Read Less

To send flowers to the family or plant a tree in memory of Arthur Jarnegan, please visit our Heartfelt Sympathies Store.

Receive notifications about information and event scheduling for Arthur

We encourage you to share your most beloved memories of Arthur here, so that the family and other loved ones can always see it. You can upload cherished photographs, or share your favorite stories, and can even comment on those shared by others. 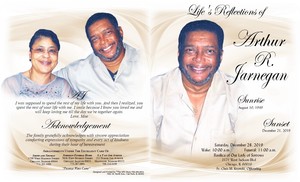