To share your memory on the wall of Brian Smith, sign in using one of the following options:

Brian C. Smith attended Beasley Elementary School and Kenwood High School. Later on in life
he received his bachelors at Southern Illinois at Carbondale, a proud accomplishment for him
and his mom.

Brian “B” Smith was known for his handsome smile, lavish style, charming personality, and
laughable words that came out his mouth. He caught the attention of many through his witty
sense of humor. He had a competitive spirit and was always ambitious to be the best. “B” was
very eager to accomplish his goals, taking him to the next level. “B” loved his family with a
passion and to know him was to love him.

Brian “B” Smith was a loving father to one, Brian C. Smith Jr.

Brian is preceded in death by: His dad, Robert C. Smith; his grandma, Sarah Landerth, his
auntie Jane; his uncles, Emmanuel “Moose” and Robert Earl; and auntie, Harriett “Kaye”.

Brian C. Smith leaves to cherish his precious memories to: His mother, Georgia C. Smith,
best known as “Dukes”; his son, Brian C. Smith Jr.; his brothers, Tommy, Joseph, Kieron,
Edmond, and Earl; his only sister, Nicole; his partner, Alma; his aunts, Linda, Ruby and
Murtel; his cousins, Latasha and Monica; the mother of his son, Kima; and a host of family
and friends.
Read Less

To send flowers to the family or plant a tree in memory of Brian Smith, please visit our Heartfelt Sympathies Store.

Receive notifications about information and event scheduling for Brian

We encourage you to share your most beloved memories of Brian here, so that the family and other loved ones can always see it. You can upload cherished photographs, or share your favorite stories, and can even comment on those shared by others. 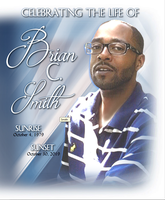