To share your memory on the wall of Clarence Dickens, sign in using one of the following options:

Clarence joined Shady Grove Missionary Baptist Church, Goodman Mississippi at an
early age, under the leadership of the late Pastor R.C Sallis. After moving to Chicago
IL, He join St. Luke M.B. Church, under the leadership of the late Pastor Andrew Seals.
Although, Clarence physically removed his fellowship with St. Luke, He never spiritually
removed himself from the word of God as he read his Bible daily.

Clarence, affectionately known as “CL” completed his education journey, within the
Holmes County Mississippi School System. He attended Goodman Elementary School;
He graduated High School from Durant Attendance Center, Class of 1971 and
received a Certificate in Welding from Holmes Jr. College. He loved all sports; however,
baseball and football were his favorites as he played them well throughout his young
adult life.

Clarence relocated to Chicago, IL in 1972, to begin his work force journey at
International Multi Food Industries, followed by several trucking companies throughout
the Chicagoland area. After work, he embarked upon another hobby, which was riding
motorcycles and became a member of the Chicago Hawks Motorcycle club, in which he
was known as “Stone.” Clarence married Bobbie Braxton in 1983. To this union one
child, Tori Braxton was born. He provided love and support in raising Darrenae Braxton
and four stepsons, Darren, Andre, and preceded in death, Antwaun and Torrence.

Clarence was a loving person, who loved life on the move. His smile could light up a
room. He had many talents: baseball, football, NASCAR racing, drawing and word
search, which truly brought him endless joy. His favorite pastime is his television.
Most of all he loved his family and friends, unconditionally.

Clarence made his transition home on November 30, 2019 at 2:20am. It is on this
day that CL received his true freedom. No more pain, suffering and wondering if you
will ever be free. As God have provided you the desire of your heart.

To send flowers to the family or plant a tree in memory of Clarence Dickens, please visit our Heartfelt Sympathies Store.

Receive notifications about information and event scheduling for Clarence

We encourage you to share your most beloved memories of Clarence here, so that the family and other loved ones can always see it. You can upload cherished photographs, or share your favorite stories, and can even comment on those shared by others. 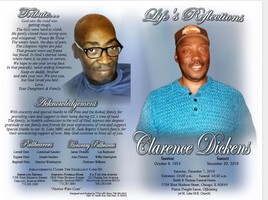