To share your memory on the wall of David Daniel, sign in using one of the following options:

Print
David Dwayne Daniel was born in Chicago, Illinois on July 19, 1961 to the late Quenion Charles Daniel and Mildred Spates-Daniel. He was the fourth of five children.
David accepted Christ at an early age. He rededicated his life to Christ in 200... Read More
David Dwayne Daniel was born in Chicago, Illinois on July 19, 1961 to the late Quenion Charles Daniel and Mildred Spates-Daniel. He was the fourth of five children.
David accepted Christ at an early age. He rededicated his life to Christ in 2002 at the Sweet Holy Spirit Church under the leadership of Bishop Dwayne Trotter. David would always tell of how good God has been to him. Giving him the desires of his heart- a wife, children, a home and many other blessings. David's favorite Bible verse was Psalms 37:4 Delight thyself also in the Lord and He shall give thee the desires of thine heart.
David attended Nash Elementary and Austin High School.
In 1984 David met the love of his life, Edithe Harris. On July 29, 1989, they were joined in holy matrimony. To this union two children were born Danielle Cherise Daniel and David Denzel Daniel. These were two of the proudest and major loves of his life. David was employed as a forklift driver for several major companies such as Sears Roebuck and Brach's Candy. He also drove Pace bus.
At an early age David developed a true appreciation, love and relationship with music. He shared his love of music and used his gift making people happy as he played music that resonated within them. He could definitely rock the crowd.
In addition, he was an excellent Stepper. As a teen David would always show up looking polished and like he just stepped out of a Gentleman's Quarterly magazine and that is how he garnered the name G.Q. David was a D.J. for over 40 years. He worked at popular establishments such as Touch of The Past, Ted's, Carolyn's and countless others. He was often sought after and loved playing all types of venues weddings, birthdays, backyard parties, political parties, etc. One of his proudest moments was when he had the opportunity to D.J. for President Barack Obama as he was
campaigning for his first term. He also worked alongside radio personality Ramonski Love. David was well-versed in all types of music from blues to gospel. David had the Gift of gab and never met a stranger. He was kind but had no
problem speaking his mind.
David lived life large and in color. He often fashioned himself as a comedian at family functions as he told jokes. He was the uncle that purchased first bikes, first birthday cakes and taught the nephews and nieces how to drive. He even got them to make a movie titled "Making The Right Decision" to keep them busy and safe. He often used his now infamous term, "Now baby you can't do that" when correcting them.
He loved young people and used music as part of his life ministry. Often getting them to open up as they discussed
music. David was creative and loved building, designing and repairing things. So much so until his siblings gave him the nickname "Benjamin Franklin". David lived life to the fullest. David continued to work and D.J. until his health began to fail him. God saw him getting weary and gave him rest. David is preceded in death by his father, Quenion Daniel; mother, Mildred Daniel; Brothers, Eddie Daniel and Charles Daniel; youngest sister, Beverly Daniel; special aunts, Bernice
Shackelford and Wadie Morehead; and very special aunt who was like a second mother to him, Dorothy Lyons.
He leaves to cherish his loving memories: A Loving wife of 30 years, Edithe Daniel; doting mother-inlaw, Georgia Harris; two children, Danielle (Ronald) and David Denzel; one sister, Valerie Daniel; two sister-in-laws, Lurletha Harper and
Rosetta Kirkwood; one brother-in-law, Kenneth Harris; four aunts, Orias Harris, Harriet Barron, Bill Ree Jackson (Nathaniel), Frances Blood; one uncle, Henry Barron; a host of nieces, nephew's, cousins and Friends; His Lonely
#1Club, Tiffany's, 5105 Club, Touch of The Past, Ted's and Carolyn's, etc. families.
Dad, I'm numb and hurting.
Wishing I could turn
back the clock.
But God is the Author
of All Our Lives.
I Love You,
Dad. Rest Easy!
We shared the love of music! And just as brothers do from time to time you came to me to be counseled and then to ask me a question or two. You asked about things occurring in my life. Nothing was too personal.
For I always knew you loved me as your Big Sister which I will always be! Rest Well My Little Brother Love Your Big Sister, Letha.
Nieces & Nephews: Uncle Dave, We'll always remember you for filling a room with laughter and telling jokes as you please.
We'll always remember late night rides to Omni. You were a relentless official when it came to Family Game night. No matter how old you were, if you weren't right, you were out, LOL. You were always there to hype the party and let the music play. No charge, it was free for me, on my wedding day.
Chicago's finest D.J. no more to say. Best Uncle ever and Baddest DJ.!
Uncle, We Love You Forever
Dear Brother, I will miss seeing you at the dinner table enjoying my cooking. I will always remember the last time you told me about not making cornbread for the Black eyed peas, and how much you enjoyed them the next day when I did. I love you brother and there will always be a place for you at the table.
I will miss you so much, little brother! Your Sister Rose
Dear Brother, how I wish you I could have more time with you. My Heart is heavy but you are not sick
anymore. God gave you rest. Love You For Always & Forever, Your Sister Valerie
Read Less

To send flowers to the family or plant a tree in memory of David Daniel, please visit our Heartfelt Sympathies Store.

Receive notifications about information and event scheduling for David

We encourage you to share your most beloved memories of David here, so that the family and other loved ones can always see it. You can upload cherished photographs, or share your favorite stories, and can even comment on those shared by others. 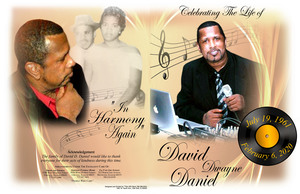