To share your memory on the wall of Deborah Davis, sign in using one of the following options:

Deborah met and married Robert Emmett Davis (who preceded her in
death) in Bernie, Missouri; they were married 54 years and to this union
five children were born. Her third child, Curtis Robert Davis preceded her
in death.

She loved to work in her garden. She would share vegetables with people
passing on the street. She also loved listening to Gospel music. One of her
favorite songs was “I’ve Been in a Storm too long” by The Mighty Clouds
of Joy.

Deborah was a beautiful, caring soul, and she will truly be missed
Read Less

To send flowers to the family or plant a tree in memory of Deborah Davis, please visit our Heartfelt Sympathies Store.

Receive notifications about information and event scheduling for Deborah

We encourage you to share your most beloved memories of Deborah here, so that the family and other loved ones can always see it. You can upload cherished photographs, or share your favorite stories, and can even comment on those shared by others. 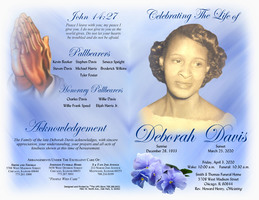