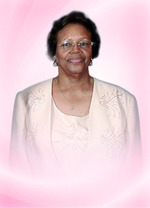 Doris Louise Sampson was born in Jefferson County, Mississippi on October 17, 1938 to the lovely
Althea Mc Donald and Simmuel Sampson. She was the 1st born of four children and grew up in a
southern home filled with warmth and love. She attended Liddell High School in Fayette, Mississippi
and eventually moved to Louisiana.
Doris grew up in a Christian home and accepted Christ at an early age. She spent her adult years
under the leadership of Bishop Louis Henry Ford, the Pastor of St. Paul Church of God in Christ in
Chicago, Illinois. She served under his leadership until he went home to be with the Lord and contin-
ued serving under his predecessor and son, Elder Charles Mason Ford, until her health began to fail
in 2012. She was a faithful member of the church and served in various capacities for 30+ years.
Doris Fluker and Nathan Champs were blessed with a son, Michael Champs, who was born on No-
vember 26, 1951 in Louisiana. Doris, her mother and son, later moved to Chicago Illinois, where
she met her late husband, Rufus Strashner. They married in 1957 and moved to Buffalo, New York
shortly thereafter. They were married for 8 years before Rufus passed away. Shortly after, Doris and
her son moved back to Chicago, where she resided with her mother until she met and married Robert
Fluker in 1965. They were married for 10 years until his death.
Doris was no stranger to hard work. She was an independent woman with a vision of excellence.
She worked hard to live well. She had a taste for the finer things in life and she ensured she had
them. She worked as an Inspector for many years at Jo Vaughn perfume company and Admiral Col-
or Tube company. She also served as a care giver for a family in Chicago.
Doris faced many hard times in life but she faced them with grace, even until death. Doris departed
this life Monday, March 30, 2020 at 1:15pm. She is preceded in death by Simmuel Sampson
(father) Donald McDonald (brother), Robert Fluker (husband), Althea Mc Donald (mother), Alicia
McDonald (sister) and Ronald McDonald (brother).
Doris leaves to cherish her memory: Her son, Michael (Debra) Champs; 5 grandchildren, Markee
Champs, Quasie Champs, Michael (Ashley) Champs, Michelle (Rod) Dail, Melissa Champs; 3 great
grandboys, Jaylin Champs, Sharod Dail, Zachariah Dail; two special nephews, Christopher McDonald
and Lance King; and a host of other nephews, nieces, cousins, and friends