To share your memory on the wall of Dorothy McCoy, sign in using one of the following options:

Dorothy received her education in the Chicago Public School system and earned her high school
diploma from Lucy Flowers High School. She accepted Christ in her life at an early age and she was
baptized at Rose Hill Baptist Church in Mississippi. Dorothy had a zeal for life and serving was her
passion.

In 1970, Dorothy met Leonard Morris and during their relationship four children were born, Nickie
Nicole McCoy, Ronald Eugene McCoy, Deborah Monique McCoy and Leonard Eugene McCoy. As
she continued her journey in life, Dorothy moved to Milwaukee, Wisconsin in 1987, where two
more children were born, Barbara McCoy and Larry D. Beck. This was the place she labeled home
and she lived there until her transition.

To send flowers to the family or plant a tree in memory of Dorothy Faye McCoy, please visit our Heartfelt Sympathies Store.

Receive notifications about information and event scheduling for Dorothy

We encourage you to share your most beloved memories of Dorothy here, so that the family and other loved ones can always see it. You can upload cherished photographs, or share your favorite stories, and can even comment on those shared by others. 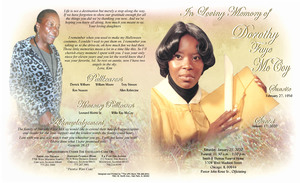