To share your memory on the wall of Ernestine Bland, sign in using one of the following options:

Print
Ernestine Bland was born on October 19, 1962 to Sarah Lee Bland and
Ernest Silver. Her parents preceded her in death.

Friday, August 2, 2019 at Swedish Covenant Hospital in Chicago,
Illinois Ernestine passed away.
... Read More
Ernestine Bland was born on October 19, 1962 to Sarah Lee Bland and
Ernest Silver. Her parents preceded her in death.

Ernestine attended and graduated from Ralph J. Bunche Elementary
School. She was given a scholarship where she went away to high
school in Michigan, later returning to Chicago and attending Lane
Tech. She later moved to California staying with her cousin Raymond.

Ernestine attended South Western College. She received her certification
in Nursing Assistant and also joined the Job Corps. She later returned
to Chicago where she had various employment opportunities, working
as a CNA, Home Aide and in Food Service.

Ernestine had rededicated herself to Christ this year at Living Word
Christian Center in Forest Park, Illinois.

To send flowers to the family or plant a tree in memory of Ernestine Bland, please visit our Heartfelt Sympathies Store.

Receive notifications about information and event scheduling for Ernestine

We encourage you to share your most beloved memories of Ernestine here, so that the family and other loved ones can always see it. You can upload cherished photographs, or share your favorite stories, and can even comment on those shared by others. 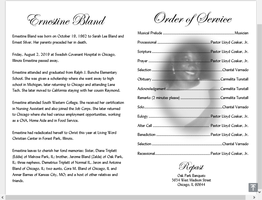