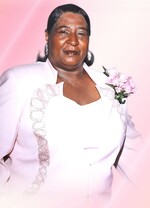 Francine Davis was born December 17, 1959, to the Late Annie Sue Wrather at
Cook County Hospital in Chicago, Illinois. She was the oldest sister of three
children. Francine was also known as “Franny” to her friends and family.
Francine confessed a strong belief in Christ and was baptized at a very early age.
She was a woman of God and found herself as a faithful member of Truthfulness
Holiness Temple, under the leadership of Pastor Betty Jean Robinson. Francine
continued to hold fast to her faith in God. She had a rich prayer life and lived out her
faith and belief in God.
The simplest pleasures in life brought great joy to Francine. She cared for her family
and loved cooking for them. Dressing, spaghetti and potato salad were her specialty
and she made those dishes for every family event. She also enjoyed going fishing with
her loving husband and friends.
Francine attended Charles Sumner Elementary School and later she attended Malcolm
X College Westside Learning Center to pursue her GED.
Francine met the love of her life Michael Wayne Davis Sr. in 1980; and they were
joined in Holy Matrimony on December 1, 1997.
Francine worked at Brach’s Candy Factory and Ramada Inn, but her most important
job was to take care of her family.
Francine was born into eternity on November 16, 2021, at 7:56 p.m.
Francine was preceded in death by: Her mother, Annie Sue Wrather; her loving
husband, Michael Davis Sr.; and one daughter, Erica Wrather.
Francine leaves to cherish her most precious memories: Two daughters, Nicole and
Angela (Tyrone); two sons, Michael Jr. (Brittany) and Mikiel (Michelle); two sisters,
Alesia (Ron II) and Rita (Issac); two grandchildren, Eli’sha and Jeremiah; and a host
of nieces, nephew, cousins and friends.