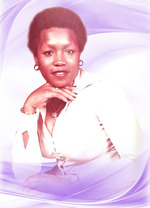 Gloria Sanders was born in Chicago, Illinois on March 26,
1958 to the Union of Marion and Helen Williams.
Gloria attended Birney elementary and Lucy Flowers High
School.
Gloria was united in marriage to Alonzo May 25, 1984. To
this union two children were born.
Gloria was a true perfectionist and took pride in everything she
attempted to do. She was very athletic and family oriented.
She was a loving mother, wife and grandmother.
Gloria departed this life on Wednesday June 24, 2020.
Gloria is preceded in death by: Her brother, Phillip; sister,
Sylvia; and parents, Marion and Helen Williams.
She leaves to cherish her memory: Two brothers, Melvin
(Jackie) Williams and Larry Williams; four sisters, Shirley
(Bennie) Calloway, Joyce, JoAnn (Edward Cornell) Hughes and
Arlene Williams; her loving daughters, Alisia and Felisia Sand-
ers; and grandson Ezra Williams Jr; and a host of stepchildren,
nieces, nephews, friends and in laws.