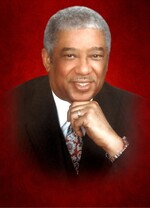 Logan (Tony or Bert) Anthony Burnett was born on September 26, 1950 in Chicago, Illinois to
the union of Mr. John Logan and Arline Franklin Burnett (Blanchard). He lived in his beloved city
of Chicago throughout his childhood and adult years.
Logan attended Austin High School where he was on the wrestling team and played the violin in
the orchestra. Logan graduated from Austin High School in 1968. Logan received his Bachelor
of Science Degree in Architecture Studies (BASA) from the University of Illinois, Circle Campus.
During his tenure at the University of Illinois, he became a Rhodes Scholar and had the oppor-
tunity to attend the University of Versailles in Versailles, France. While in Europe Logan visited
several countries studying the various forms of architectural design throughout the ages.
After college Logan met and married Fredrena Thomas, they tied the knot on May 25, 1984, this
union produced five sons, Justin Leonard, Breton Shepard, Sterling Garrett, Cameron Fitzgerald
and Julian Von. Logan also had a son from a previous a marriage Logan A. Hawkins.
Logan worked for the city of Chicago for 20 years as a City Planner. Logan retired from the City
of Chicago and then took on a position with Globetrotter, an Architecture and Engineer firm until
his death.
Logan departed this life on Monday, October 19, 2020. He was preceded in death by: his
mother and father; one son, Sterling Garrett; his mother-in-law Lenora Stewart; one brother,
Michael; two sisters, Pauline Graham and Bettye Jean Braswell and one sister-in-law Julie Thomas.
He leaves to cherish his memory: his beloved wife, Fredrena; five sons, Logan, Justin (Lashana)
Cameron, Breton and Julian; one grandson, Bryce, all from Chicago, Illinois; one sister, Ptoshia
Burnett from Goldsby, Oklahoma; one brother, John Fitzgerald Burnett from Romeoville, Illinois;
two sister-in-law, Karen Williams (Brian) from Chicago, Illinois and Adrienne Johnson (Conrad)
from Douglass Field, Georgia; his father-in-law Fred Thomas also from Chicago, Illinois; and a
host of nieces, nephews, cousins and friends.
Logan was a baking enthusiast, die hard Chicago sports fan, fantasy football commissioner, part
time golfer, but most importantly he was a devoted family man; untiring for the love, care and
responsibilities he had for his family. He rests in sleep awaiting the resurrection, which our Lord
Jesus Christ promise to all mankind.