To share your memory on the wall of Mondria Brown, sign in using one of the following options:

Print
Mondri Ascalphus Brown was born into life to Lashell Parent and
Dominique Brown on May 8, 1995, in Oak Park, Illinois he was
the middle child.

Mondri confessed his faith at an early age at Jordan Temple Mis-
sionar... Read More
Mondri Ascalphus Brown was born into life to Lashell Parent and
Dominique Brown on May 8, 1995, in Oak Park, Illinois he was
the middle child.

Mondri attended Eliza Chappell Elementary School and Carl Schurz
High School in Chicago, IL Mondri worked for Ceasefire helping to
bring peace to the streets of Chicago, Illinois. Mondri was a
strong, independent, loving father, son, and brother. He always
looked out for his family and the ones he loved. No matter what,
he made sure everyone was good. Mondri was loved by everyone
he encountered.

To send flowers to the family or plant a tree in memory of Mondria Brown, please visit our Heartfelt Sympathies Store.

Receive notifications about information and event scheduling for Mondria

We encourage you to share your most beloved memories of Mondria here, so that the family and other loved ones can always see it. You can upload cherished photographs, or share your favorite stories, and can even comment on those shared by others. 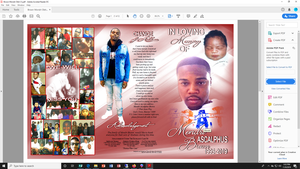