To share your memory on the wall of Peggy Cullins, sign in using one of the following options:

Peggy relocated to Chicago at an early age with her mother
and father. As a teenager Peggy attended Marshall High
School... Read More
Peggy Ann Cullins was born to Roxadda Parker and Edward
O’Neal Cullins on October 8, 1944.

Peggy relocated to Chicago at an early age with her mother
and father. As a teenager Peggy attended Marshall High
School and later became a laborer.

She leaves to cherish her memories: Five children; fourteen
grandchildren, with one preceding her death; nine great-
grandchildren; two nieces and one nephew; and a host of
family and friends.
My mother was a great mother and she did everything she could
to Take Care of us no matter what. So I say so long but not
goodbye. I love and miss you more than you will ever know.
Love always from your son, Punkin R.I.P. Momma
Read Less

To send flowers to the family or plant a tree in memory of Peggy Cullins, please visit our Heartfelt Sympathies Store.

Receive notifications about information and event scheduling for Peggy

We encourage you to share your most beloved memories of Peggy here, so that the family and other loved ones can always see it. You can upload cherished photographs, or share your favorite stories, and can even comment on those shared by others. 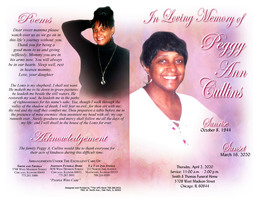