To share your memory on the wall of Richard Spears, sign in using one of the following options:

Print
Richard Lamont Spears was born in Chicago, Illinois on September 13, 1959. He
was born to Ethel Mae Thomas and Noel Spears-Bey, who preceded him in death.
Richard was raised as her own by Mary C. Spears.

Richard graduate... Read More
Richard Lamont Spears was born in Chicago, Illinois on September 13, 1959. He
was born to Ethel Mae Thomas and Noel Spears-Bey, who preceded him in death.
Richard was raised as her own by Mary C. Spears.

Richard graduated from Austin Career Academy High School in Chicago, IL.
He held various career positions, but his latest was as a butcher from Butcher & Lar-
der, from where he retired in January 2018.

Richard departed this life on November 6, 2019. He is preceded in death by
his parents and his son, Richard Lamont McCarthy (Kojack).

To send flowers to the family or plant a tree in memory of Richard Spears, please visit our Heartfelt Sympathies Store.

Receive notifications about information and event scheduling for Richard

We encourage you to share your most beloved memories of Richard here, so that the family and other loved ones can always see it. You can upload cherished photographs, or share your favorite stories, and can even comment on those shared by others. 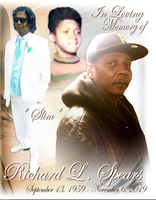