To share your memory on the wall of Stephen Taylor , sign in using one of the following options:

He attended Whittier Elementary School and Emerson Junior High in
Oak Park, Illinois. He played football at the Park District and loved it
so much that he went on to play for Oak Park and River Forest High
School where he graduated in 1998.

He moved back home to Oak Park and started working for Alliance Ground International where he was
working on Wednesday, December 4, 2019 when God called him home.

To send flowers to the family or plant a tree in memory of Stephen Taylor , please visit our Heartfelt Sympathies Store.

Receive notifications about information and event scheduling for Stephen

We encourage you to share your most beloved memories of Stephen here, so that the family and other loved ones can always see it. You can upload cherished photographs, or share your favorite stories, and can even comment on those shared by others. 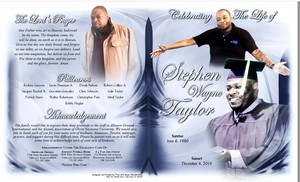