To share your memory on the wall of George Hill, sign in using one of the following options:

Print
George Hill Jr. was born in Chicago, Illinois on August 19, 1960. George
was born to the union of George Hill Sr. and Ollie Mae Gamble-Hill.

George went to Shepard Elementary School and furthered his education by
going ... Read More
George Hill Jr. was born in Chicago, Illinois on August 19, 1960. George
was born to the union of George Hill Sr. and Ollie Mae Gamble-Hill.

George went to Shepard Elementary School and furthered his education by
going to Harrison High School. After high school George enlisted in the
National Guards. George later met Renee Wilson and was united in Holy
Matrimony in Chicago on August 29, 1987. To this union three wonderful
children were born.

George found Christ while attending Living Word Christian Center, under the
leadership of Pastor Bill Winston where he was later baptized. George later
met Linda Diviscour in 1993 and they became a part of The Sword of the Lord
Ministries under Pastor Randy Hall. Linda and George had a loving relationship
and she remained a true and loving friend to George unto his death.

George worked at Gate Gourmet for many years as a forklift driver. George
was a Jack of all trades. He was good at remodeling houses, building decks,
porches as well as painting. George decided to go into business for himself
(George Hill Handyman Services) George was good at what he did, and he put
his all in all into his work. George was an excellent cook and he loved cooking.
George like playing dominoes and bid whiz. George lived his life to the fullest!!!

George made his transition to his new home on December 23, 2019 at 8:03
a.m. at Mount Sinai Hospital. His father George Hill Sr. mother Ollie Mae
Gamble-Hill, and brother Carl Oscar Gamble all preceded him in death.

To send flowers to the family or plant a tree in memory of George Hill, please visit our Heartfelt Sympathies Store.

Receive notifications about information and event scheduling for George

We encourage you to share your most beloved memories of George here, so that the family and other loved ones can always see it. You can upload cherished photographs, or share your favorite stories, and can even comment on those shared by others. 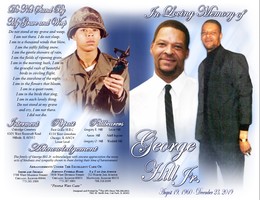