To share your memory on the wall of Isacc Gilbert, sign in using one of the following options:

Print
Isacc Gilbert was born January 6, 1952 to Lenore
and Isacc.

Isacc confessed Jesus Christ as his Lord and Savior.

Isacc had an unwavering love for his job at the Inter-Continental
Hotel, where he retired. <... Read More
Isacc Gilbert was born January 6, 1952 to Lenore
and Isacc.

Isacc confessed Jesus Christ as his Lord and Savior.

Isacc had an unwavering love for his job at the Inter-Continental
Hotel, where he retired.

Isacc was loved by many. He was affectionately known as “Pie”.
He had a great love for music and he was an avid Bid Whist
player.

Isacc departed this life on January 4, 2020 in the comfort of
his home, surrounded by family.

Isacc leaves to cherish his memory: His loving mom, Lenore Dal-
las Jones; his loving aunt, Janet (Atlee Warren); one son, Karl;
step-mother, Marvelene Matthews; seven brothers and sisters,
Paul Gilbert of Chicago, IL, Catherine Matthews (George) of
Hillside, IL, Lee Dallas (Clarissa) of Rockford, IL, Martha, Iva
Papoose and Tamerra, all of Chicago, IL; and a host of loving
cousins, nieces and nephews whom he helped to raise. He will
be remembered as a loving and caring uncle and cousin
Read Less

To send flowers to the family or plant a tree in memory of Isacc Gilbert, please visit our Heartfelt Sympathies Store.

Receive notifications about information and event scheduling for Isacc

We encourage you to share your most beloved memories of Isacc here, so that the family and other loved ones can always see it. You can upload cherished photographs, or share your favorite stories, and can even comment on those shared by others. 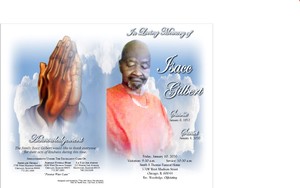