To share your memory on the wall of James Brown, sign in using one of the following options:

James accepted Christ at an early age, at Hopewell M.B. Church
in Chicago.

James accepted Christ at an early age, at Hopewell M.B. Church
in Chicago.

James was a long-time employee of Milco Candy Factory and later
went on to work for a small company that sold chickens until his
health began to fail.

James Brown departed this life on August 17, 2019 at 10:30
a.m. at the Holy Cross Comfort Care Hospice Center. James was
preceded in death by: Both parents and his wife, along with one
brother.

James leaves to cherish his memory: A devoted sister, Izora
Ferguson; two sons, James Brown and Graylon Brown (Myrna);
six grandchildren; ten great-grandchildren; one great-great-
grandson, Graylon the fourth; a host of cousins in Detroit and
Chicago; and one aunt of Eudora, Arkansas He had a special and
remarkable relationship with Elisa a.k.a Bebe.
Read Less

To send flowers to the family or plant a tree in memory of James Brown, please visit our Heartfelt Sympathies Store.

Receive notifications about information and event scheduling for James

We encourage you to share your most beloved memories of James here, so that the family and other loved ones can always see it. You can upload cherished photographs, or share your favorite stories, and can even comment on those shared by others. 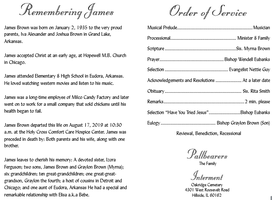 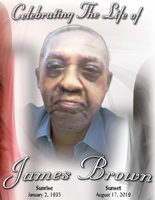